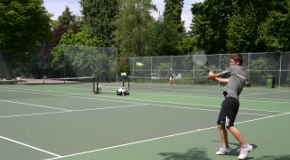 During the summer season (late April to early September), six courts at the Beach Avenue entrance to Stanley Park are operated as pay courts. They can be booked up to a week in advance, call the pro shop at Stanley Park's tennis courts.

Book a tennis court in Stanley Park by phone.