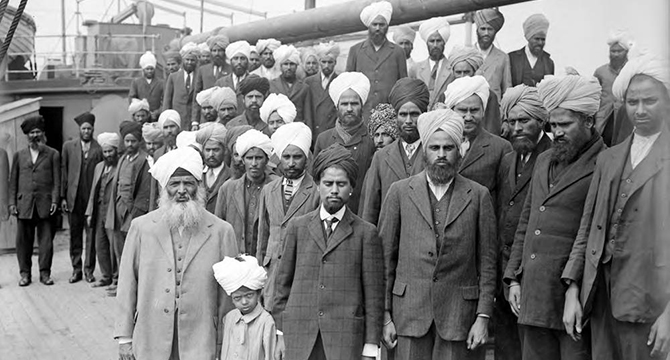 On May 18, 2021, Vancouver City Council formally apologized for historical discrimination against 376 passengers travelling on board the Komagata Maru steamship from British India in 1914.

Council declared Sunday, May 23 as the first Komagata Maru Remembrance Day to be marked in our city.

On May 23, 1914, the Komagata Maru steamship arrived into Vancouver's Burrard Inlet. On board were 376 passengers including 340 Sikhs, 24 Muslims, and 12 Hindus who were mostly from the Punjab region of India. They came hoping to have a life full of opportunities here in Canada.

Despite being British subjects, they were denied entry into Canada based on discriminatory and racist laws. Passengers were forced to remain on board without sufficient access to medical aid, food, and water.

After two months of living in unsafe and deteriorating conditions, the ship was ordered to turn around on July 23, 1914, and passengers were forced to return to India. Upon their return, 19 passengers were tragically shot and killed. Many others were injured or jailed as they were labelled political agitators.

Our apology recognized Vancouver City Council's racism when they supported through resolution PDF file (542 KB) rather than denounced the federal government’s racist immigration laws in June 1914 opposing people from India and other Asian countries to enter and live in Canada.

In 2008 and 2016, the Legislative Assembly of British Columbia and the Government of Canada each formally apologized for this terrible act of discrimination.

Our apology for our role in the Komagata Maru incident is part of a broader ongoing effort to recognize historic discrimination against the South Asian community, which arises from a 2019 Council decision.

One goal of this work is to educate decision-makers and the broader public of the human rights violations against people of South Asian descent, and the ongoing impact and harm of discriminatory laws, regulations, policies, and practices have on them, as demonstrated by the Komagata Maru incident.