With works of art among the natural beauty of gardens, evergreens and redwoods, there is plenty to see in Queen Elizabeth Park. 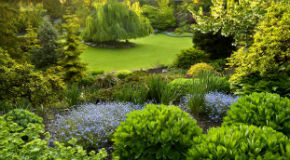 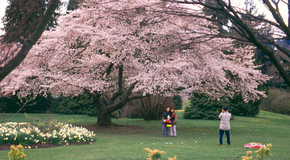 Canada's first civic arboretum was created along the park's north and north-western sections. The first plantings were done in 1949 on the north slopes by a group of Junior Forest Wardens.

They began by planting blocks of timber species such as ponderosa pine, subalpine spruce, and Douglas fir. M ost of the larger trees are about 60 years old. Among these is the coast redwood, which can grow to be one of the tallest trees in the world.

There are now about 1500 trees from across Canada, along with many exotic species, creating a beautiful landscape. 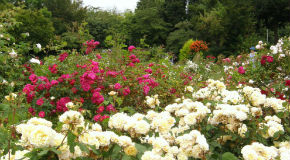 Located on the south-western perimeter of the park, the Rose Garden was built in 1967 to commemorate Canada’s Centennial. It contains many rose varieties including hardy hybrids such as the Parkland and Explorer series developed in Saskatchewan. 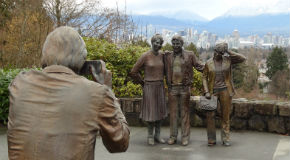 Be sure to see Photo Session, a bronze figurative sculpture of a man photographing three people, by J. Seward Johnson, Junior. This was a gift to the park from the artist in 1984.

The park's most famous sculpture is Knife Edge-Two Piece by internationally renowned British sculptor Henry Moore. Located on the plaza to the east of Bloedel Conservatory, it was donated to the Park Board by Prentice Bloedel. The bronze sculpture is one of three copies; the others can be found in front of the Houses of Parliament in London, England, and at the Rockefeller Estate in New York.

Four sculptures by Cameron Kerr, from Campbell River, BC, are located in the plaza. The marble sculptures were commissioned by the City of Vancouver and are on temporary display outside the Conservatory.

The love locks sculpture entitled, Love in the Rain by Vancouver artist Bruce Voyce, was installed at the lookout above the Quarry Garden in August 2016. Sweethearts are encouraged to 'lock in their love' by affixing a padlock to the sculpture.

The fountain operates on a program to vary the heights of the jet and is an integral part of the new (2007) QE Plaza—built atop Vancouver’s principal drinking water reservoir. 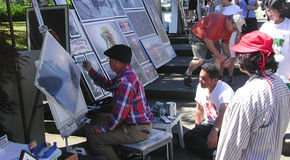 Visiting the Painters’ Corner in spring and summer is like wandering through an outdoor art gallery. Artists have their landscape pieces on display, and all work is for sale (and is the original work of the artist on-site). 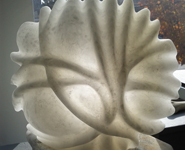 Flora and Fauna, a group exhibition by the Sculptors’ Society of British Columbia (SSBC). features more than 45 individual works by 15 artists, will run from 9 February through 17 March under the dome at the Bloedel Conservatory.

SSBC member Jean-Guy Dallaire will be on-hand Tuesdays and Fridays from 1 to 4 pm to give live demonstrations and to discuss the methodology in creating sculptural works of art.

Pieces are for sale with partial proceeds going to benefit The Bloedel Conservatory.