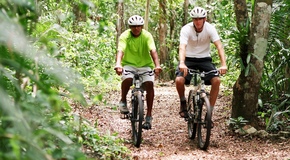 Stanley Park includes the 8.8 km Seawall that can draw thousands of pedestrians and cyclists every day for leisure and commuting. The Stanley Park Causeway gives commuters, both in cars and on bikes, a route between downtown and the North Shore.

A major objective of the plan is to reduce conflicts between pedestrians and cyclists, and congestion, at various points.

The Park Board adopted the extensive Stanley park Cycling Plan and approved an implementation strategy to realize its vision to improve the experience of Stanley Park for all park users, while maintaining or enhancing the park's ecology.

The public engagement part of this initiative is finished. The final consultant team's plan has been posted.

Now, the Park Board is reviewing the consultant team's recommendations.

The Stanley Park Cycling Plan is comprised of a wide range of recommendations to be implemented over time, as capital budgets permit.

Some are fairly easy to implement, while others will require significant funding, further study, and/or approval from other agencies. A few recommendations are contingent on the implementation of others.

The plan contains both system-wide and site-specific recommendations grouped under six general themes:

At 8.8 km, the one-way bike path can be a challenge for some cyclists. As part of the cycling plan, the Parks Board will develop alternative shortcut bike routes.

The Parks Board is seeking a cost-effective proposal for bike parking in high-traffic areas, including Third Beach.

We will use a number of means to reduce the potential for conflict between cyclists and pedestrians, including consistently marking high-traffic areas, and adapting popular lookout points. Some of these recommendations have already been implemented.

The Stanley Park Ecology Society will be involved in reviewing plans to ensure the ecology of Stanley Park is maintained or enhanced by changes.

We will make connections to and within Stanley Park clear and direct.

More directional signs will be installed on trails, and sign messaging will be made more clear and consistent.

Recommendations have been organized into categories depending on priority and budget.

Highest priority has been given to changes with additional benefits such as improving accessibility or benefiting the environment.

These recommendations have already been, or are currently being implemented, at low cost:

A number of recommendations have been identified as high first priorty, and are undergoing design. They will be implemented by mid-2013:

Other recommendations will be implemented over time as budgets permit. Some improvements will need significant funding, further study, and approval from other agencies.

Stanley Park is one of the greatest parks in the world

Stanley Park is known as one of the great parks of the world. With its 400 hectares (1,000 acres) of greenspace adjacent to Vancouver’s downtown core, the park provides a variety of experiences to visitors in a central, urban location.

The park attracts both tourists and residents due to its lush rainforest and numerous attractions. These different groups of people use the park in a variety of ways and for different purposes.

For example, the park includes the 8.8 km Seawall that can draw thousands of pedestrians and cyclists every day for leisure and commuting.

The popularity of Stanley Park has resulted in a variety of cycling issues on the Seawall (Seaside) loop, and at entrances to the park, and management issues such as environmental impacts on trails within the interior of the park, including:

The Park Board has greatly improved facilities for cycling in the park over the last ten years. Now there is a need for further improvements based on a comprehensive cycling plan. 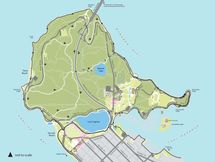 Where is Stanley Park?

Download a printable map of Stanley Park which shows the major sites, attractions, trails and more, or the more detailed official map and guide.