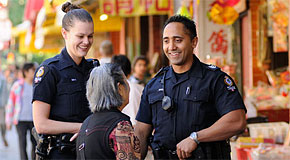 All fire halls will become safe places for vulnerable persons and seniors in need.