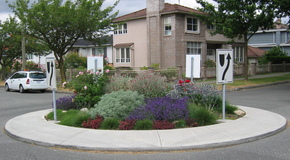 Traffic calming helps to encourage safe driving by slowing the speed, and reducing the volume of street traffic. The City of Vancouver's priority areas for traffic calming projects are residential blocks with schools and parks.

There are three ways the City implements traffic calming measures in residential neighbourhoods:

Learn about types of traffic calming

Find out how speed humps help to reduce the speed of traffic on Vancouver's neighbourhood streets and lanes.

Find out how curb bulges help increase safety for pedestrians, and encourage vehicles to slow down.

How the City keeps streets safe

Use this VanConnect form to request sidewalk repairs in the city.

Use this VanConnect form to request sign repair in the city.

Construction, film, and special event projects that use streets, laneways, sidewalks, and bicycle facilities are required to control traffic.

What is on the go

Learn about community improvements that are part of ongoing planning projects in Vancouver.