This year marks the 50th anniversary of the oldest Punjabi Market in North America. This historic market serves many diverse communities including BC’s South Asian community.

We continue to work with the community to honour the many contributions the Punjabi Market makes to the life of the city, and to ensure that this social, cultural, and economic hub continues to flourish in years to come. Learn more about our efforts and work to date

Vancouver City Hall will be illuminated in orange on Sunday, May 31, to celebrate the anniversary.

We have committed to supporting a mural led by the community in Punjabi Market.

Due to the COVID-19 (Coronavirus) pandemic, our plans to collaborate with the community and celebrate the anniversary have been postponed. 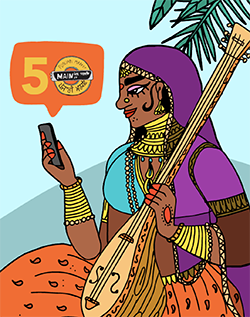 The Punjabi Market Regeneration Collective (PMRC) will host a virtual celebration on Sunday May 31 at 7:10pm on their various social media platforms.

Hosted by Hockey Night in Punjabi’s Amrit Gill, it will feature interviews with prominent figures in the community including:

The virtual celebration will also include live performances, poetry, and exciting information on the new Punjab E-market.

Find more information about the celebration and the key work that the PMRC are doing External website, opens in new tab

History of the Punjabi Market

The beginning of the market

The first shop, Shaan Sharees and Drapery, was opened by Sucha Singh Claire who immigrated from England and saw that there were no Indian fabric stores in Vancouver. With the new Ross Street Gurdwara opening up in south Vancouver, he found that many Indo-Canadians moved to this area which would be a perfect location for his shop.

This enticed many other business owners including jewellery stores, sweet shops, and restaurants, such as Himalaya Restaurant, to open in what is now known as the Punjabi Market.

This area became a beloved gathering space which hosted cultural celebrations and gave many a sense of belonging and connection to the multi-cultural city that Vancouver was becoming.

“When I opened my shop back in 1970, I never dreamed that one day that would be the creation of the Punjabi Market. I recall celebrating the 25th anniversary of the market at Fraser View Banquet Hall in 1995. We had over 600 people in attendance along with community leaders and politicians and we gave out our first Punjabi Market Directory to the community.” – Sucha Singh Claire.

In the 1980’s and 90’s there were a variety of bustling South Asian shops in the market area. Families would visit from all over Canada to buy traditional wedding attire, gold jewellery, enjoy Indian food, rent Bollywood movies, and buy their favourite bhangra cassettes.

The market which was also known as Little India was the first place outside of South Asia to have Punjabi on street signs. The first ever Vaisakhi parade in Vancouver was also celebrated and passed through the market in 1979 and it continues to do so with thousands of people attending making it one of Vancouver’s largest annual parades.

In the early 2000’s many businesses started leaving the market and many new immigrants began to move out of Vancouver. The market saw storefronts left empty and the area began to lose some of its cultural and commercial identity. This cultural exodus left a large gap for the remaining South Asian community in Vancouver.

Preserving and sustaining the market

In 2019 Heritage Vancouver, a non-profit society, added the Punjabi Market to their Top10 most endangered heritage sites. 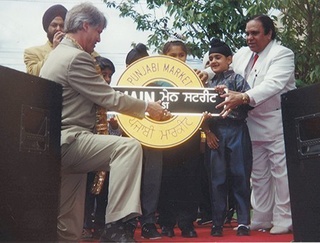 Images provided by the PMRC

Much of the energy behind efforts to revitalize the market comes from the PMRC. The PMRC was established to bring stakeholder groups together with the intention of empowering the voices of those groups that don’t necessarily have business interests in the market, but want to participate in its preservation and enhancement.

The PMRC believes that the cultural significance of the Punjabi Market is just as important as its economic importance, and that the space is a cultural landmark with historic significance. The PMRC has been working closely with us to guide the process of celebrating and renewing the market.

Quote from Gulzar Nanda, the Chair of the PMRC

“The Punjabi Market is a treasured national landmark. For the 50th anniversary, the PMRC wants to celebrate our elders, our culture, and our roots. Yet, we also have our eyes set on the future. Our hope is that in conjunction with the City, and various other partners, we can bring a new energy into this space and make it a landmark that is rooted in South Asian flair and culture.”

The motion directed staff to:

In October 2019 and early 2020, we held a series of engagement activities that invited community members, area business owners, and other stakeholders and supporters to help identify ways to acknowledge the market’s rich history and shape its future.