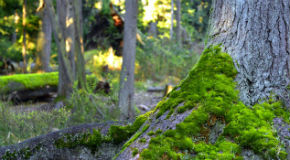 Take the opportunity to see our healthy, temperate-zone coastal rainforest

Take in the forest's intoxicating beauty any time of year – the further you travel along its trails, the more surprises you will find.

Centuries-old western red cedar and moss-dripped bigleaf maple can be found, as can dense cathedral-like stands of Douglas fir towering over 50 metres tall, risen from the ashes of the great fire of 1886.

Watch for new life springing up with vibrancy from the wind storm of 2006. Fifteen thousand new trees and shrubs were planted in the blow-down areas.

Before being designated a reserve, the Stanley Park peninsula was logged by six companies between the 1860s and 1880s. Countless remnants of these former woody sentinels can still be seen as stumps.

However, there were giant trees whose massive size or location within the forest precluded their felling to the axe and blade. These oldest of park dwellers are known as "monument trees" and can be discovered by park trail blazers in three distinct areas:

Learn about the trails of Stanley Park

Today, the remaining 700- to 800 year-old stump of this Western red cedar tree is still one of the most well-known and photographed landmarks in the park.

Damaged by a severe windstorm in 2006, the tree was slated for removal due to safety concerns. However, in 2009 the Hollow Tree Conservation Society stepped forward with a plan to stabilize the tree in a project funded entirely by private donations.

Following a public ceremony in October 2011, the restored Hollow Tree began a new chapter in its long history in Stanley Park.