Michelle Allard was born and raised in Vancouver, studied at the Toronto School of Art, the Ontario College of Art and Design, and completed an MFA at the University of Guelph (2003). In 2006 Michelle relocated to Vancouver after twelve years living and working in Toronto. Her sculpture and installation negotiates processes of accumulation and transition, employing and repurposing cardboard, plastics, and packaging and shipping related materials. Michelle has exhibited extensively nationally and internationally with recent local solo and group exhibitions at the Richmond Art Gallery (“HighLife”, 2007/08), and Centre A (“Showroom”, 2008). Michelle has participated in several artist residencies including the Aomori Contemporary Art Centre in Japan (2005), and has recently been awarded a four month residency at La Cité Internationale des Arts in Paris through the Canada Council for the Arts. 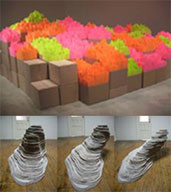 Kevin Schmidt grew up in the Vancouver suburbs, and completed a BFA at Emily Carr in 1997. He remains based in Vancouver. His work largely deals with cultural interpretations of landscape. Small Waves, cold water, was his first solo show at Access Gallery in 2003. In 2002, his DVD Long Beach Led Zep debuted at the Contemporary Art Gallery. Long Beach Led Zep continues to show across Canada and internationally and has been purchased by the National Gallery of Canada. His latest work, entitled Fog, was shown at Presentation House Gallery in North Vancouver and at Mercer Union in Toronto.

Josh Beamish, a contemporary dancer, choreographer and the Artistic Director of MOVE: the company, began dancing at the age of three in Edmonton, Alberta, however he received his formal training in classical ballet, contemporary, jazz, and modern dance in Kelowna, BC.  Upon moving to Vancouver, Josh continued his training at Pacific DanceArts, while also dancing for the Source Dance Company. His work as Artistic Director of MOVE: the company, has been presented in New York, across Canada and extensively throughout BC. He has also danced and/or choreographed for films such as “Spectacular”, “Life As We Know It” and “The Wicker Man", and has previously danced for Vancouver-based choreographers Simone Orlando and Amber Funk Barton.

Kristen Roos is an artist whose approach to creating sound art usually involves a translation, or change, from one state to another. Objects normally used to bring information in a particular way are repurposed, and reconstructed into new vibrating forms. These temporary structures hope to inspire infinite interpretations for the objects and spaces that make up the world around us. His work has been exhibited/performed in artists-run centers and festivals nationally. His radio work has aired in Canada, New York, Boston, London, Melbourne (Australia), and is featured in the Errant Bodies publication Radio Territories.  Kristen completed a BFA at Concordia University and an MFA from the University of Victoria.

Althea Thauberger is a media artist working in film, video, photography, and performance. She has exhibited extensively internationally in Europe and North America and has had recent exhibitions in China and Singapore. Althea completed a BFA in Photography at Concordia University and an MFA in Studio Art at the University of Victoria. 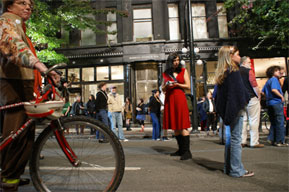 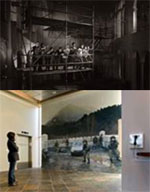 Born in Winnipeg, Manitoba, in 1972, Rhonda Weppler earned her MFA in Sculpture from the University of British Columbia in 1998. She received her BA, majoring in both Fine Art and Art History, and Psychology, from the University of Toronto in 1996. Rhonda’s work has been exhibited in numerous galleries and museums across Canada, and internationally. Working in a variety of sculptural media, her works plays with the discontinuities between reality and representation. Her recent collaborative work with Trevor Mahovsky was shown in 2004 at the Or Gallery in Vancouver, and has been shown this year at ARCO in Madrid, the Ottawa Art Gallery, and at Loop Raum in Berlin.