Laneways are broadly under-utilized as public space and are being reimagined as "people-places" in cities worldwide. There is potential for an enhanced public area in many lanes while ensuring that essential functions such as loading, parking, and emergency access are maintained. 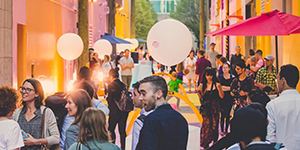 Launched in 2016, Alley-Oop was the first re-imagined laneway with murals lining both sides of the lane with the intention of enhancing people's moods, and transforming a once dark, drab alley into a fun inviting public space.

Bold pink and yellow paint and basketball hoops act as a beacon to those working in Vancouver’s business quarter, encouraging them to play, exercise, and socialize in the space.

Located on West Hastings St bounded by Granville St and Seymour St, the number one activity in the laneway is taking photos and creating videos! 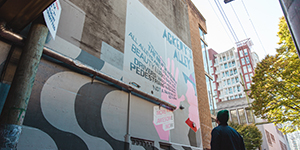 South of Granville St between Smithe St and Robson St, brings the art and culture of the Orpheum out into the street, repurposing a utility laneway into a vibrant public space.

Launched in 2018, the alley is named in honour of Ivan Ackery, the most awarded theatre manager in North America, who ran the Orpheum from 1935 through 1969.

When Hollywood stars made live appearances, Ackery let them escape admiring fans through the back door into this alley. Ackery would also let folks in the back door off the lane to catch a glimpse of the show from backstage.

VIVA Vancouver continues to partner with community groups to identify, test, and activate laneways as places for gathering, connecting, play, and community building.