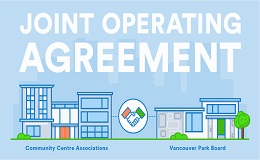 The Park Board is writing a new chapter in its relationship with Community Centre Associations.

In April 2016, the Vancouver Park Board began a fresh consultation process to consult with Community Centre Associations (CCAs) on a new JOA by the end of the year.

The process was designed to include all CCAs and to be collaborative, fair, reasonable, and fully transparent. This page includes all of the materials related to the JOA consultation process.

April 28, 2017 - Final copies of the Amended Final Draft JOA were offered to CCAs for signature.

In early 2016, the Vancouver Park Board committed to a three-phase process to modernize a new JOA called “A new way forward”.

We are approaching a critical moment in the relationship between the Vancouver Park Board and CCA partners. The deadline for the CCAs to sign the JOA is September 30, 2017.

Read letters from the Director of Recreation:

In April, 2016, an overview of the JOA consultation process and schedule were developed by the JOA Facilitator, Raymond Penner.

Phase 1 of the consultation process began with kick-off meetings and a dialogue session between the facilitator and the CCAs to discuss shared principles and essential components of a new JOA.

In response to feedback from a group of CCAs presidents, the Park Board committed to circulating revised content after each consultation session.

The purpose of Phase 2 was to present and review the Draft 2 JOA with the CCAs for validation.

The purpose of Phase 3 was to present the Final JOA for consideration to the Vancouver Park Board.

To facilitate review of the Amended Final Draft JOA, the General Manager distributed an FAQ document, a summary of changes document and a Key Changes document to the CCAs attached to a January 12 letter from Park Board general manager about amended final draft.

On February 9, 2017 and February 16, 2017, the Vancouver Park Board held a special meeting to hear the public’s feedback on the Final Draft JOA and vote on staff recommendations.

The Vancouver Park Board heard from 63 speakers on their outstanding areas of concern with the JOA.

The Park Board discussed the Final Amended JOA and unanimously voted to grant a 30-day legal review period PDF file (85 KB) to enable a session and/or sessions for reviewing and considering any outstanding legal issues in the development of the JOA.

Park Board staff were provided direction by the Park Board to review and consider any outstanding legal issues in the proposed Amended Final Draft JOA.

The  March 15, 2017, letter from Park Board general manager about legal consideration of the JOA describes the direction given by the Park Board to provide two legal sessions: An Exploratory Session and a Review Session.  Read the related documents:

Park Board staff held an exploratory session for CCAs and their counsel to attend. The purpose of this session was to understand all barriers that may prevent the CCAs from legally being able to sign the JOA.

The goal for the exploratory session was to capture a summary of all legal issues. Read the related documents:

The process for the Legal Review Session was described in a March 29, 2017, letter from Park Board general manager about legal review session of the JOA.

On April 10, 2017, the Vancouver Park Board approved a new JOA with six further amendments.

Read the April 13, 2017, letter from Park Board Director of Recreation about JOA board decision and next steps PDF file (148 KB).

Final copies of the JOA were offered to the CCAs for signature on April 28, 2017.

The lined copy below shows all changes made from the March 6, 2017 Amended Final Draft to the JOA approved by the Vancouver Park Board on April 10, 2017. 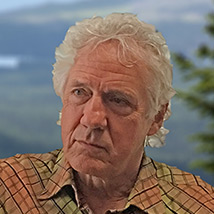 Raymond Penner is a veteran facilitator, mediator, and negotiator who has provided advice and support to governments, private companies, educational institutions, and individuals over a 30-year career as principal of the Strategic Action Group.

Mr. Penner has a master’s in English from Simon Fraser University and a master’s in psychology from UBC, and has done post-graduate work in organizational psychology at the Fielding Institute in California. He is a member of the International Association for Public Participation.