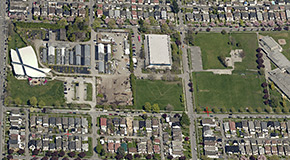 The Sunset Community Centre was rebuilt and relocated to Main Street in 2006.

The new community centre became disconnected from the park and playground, with an open space separating them. The need to reconnect and renew the park prompted requests for improvements by the community.

After extensive public consultation, the concept design for the Sunset Park upgrade was approved by the Board in November 2015.

As a result of the Sunset Park Master plan, the Sunset Nursery and Works Yard is being upgraded.

This renewal project will improve the nursery and works yard functions to better serve the residents of Vancouver.

To learn more, email us at Nursery.Sunset@vancouver.ca.

Stay involved with the master plan