It is on the unceded territories of the Musqueam, Squamish, and Tsleil-Waututh peoples.

Before being redeveloped by settlers, this area was a coniferous forest of hemlock and cedar trees, with a beautiful waterfall and salmon-bearing creek running through a natural ravine.

The 38.03 hectare park is located in the neighbourhood now known as Killarney between South East Marine Drive and E 63rd Avenue on Kerr Street. This circular route is 2.37 km or approximately 3,110 steps, and will take about 35 minutes to walk.

The Park, Vancouver’s fifth largest, has an array of unique features which have been redeveloped since colonial settlement and has continued to undergo several transitions.

This area was an important site for the Musqueam, Squamish, and Tsleil-Waututh peoples, who likely used it for resource extraction, hunting and fishing grounds.  An area such as this would have seen a large number of people using it as a transit route as it is close to the Fraser River.

The park can be accessed by a parking lot on the east side of Kerr Street and there are several trails to choose from which vary in surface quality from narrow bark mulch paths, to wider compacted gravel walkways.

The suggested route is a circular route however feel free to walk the interior trails and really take in what is area has to offer.

Please note, that often today’s trails frequently match the traditional paths of the First Nations peoples, as it was often the best path that matched the lay of the land.

All gravel paths throughout the park including some with slight inclines are wheelchair accessible.

Bark mulch trails can be uneven and may not be accessible.

The Park
PREV   NEXT 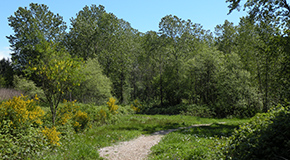 Originally a coniferous forest of cedar and hemlock trees, this area was defined by its natural ravine, salmon bearing creek and waterfall.

Since being colonized by European settlers, it has continued to go through multiple phases of use including hunting, logging, and orchard land.

In 1944, the area became the Kerr Road Dump, and functioned as a landfill until 1967. So much waste had been deposited that when the dump finally closed, the fill was up to 49 metres deep in places. The old dump boundaries are now wooded pathways, and steam vents show that the garbage buried beneath the surface is still decomposing.

Twenty years later it was officially opened as a park, and named after Everett Crowley, a Park Board Commissioner serving from 1962-1964. 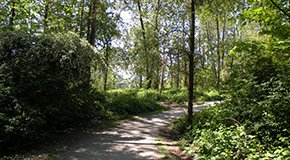 Everett Crowley Park is in transition. Since the early 1970's, native and invasive plants and animals have been slowly recolonizing the park, transforming it into a young forest of hardy deciduous trees, wildflowers, and opportunistic blackberry.

The area is recovering and the result is a botanically diverse landscape frequented by birds and other wildlife, who find refuge in this urban wilderness. 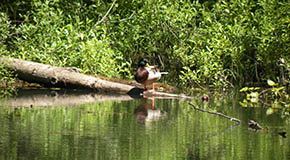 Everett Crowely was the owner of the last operating dairy in Vancouver called "Avalon." It is fitting that the water feature in Everett Crowely park is named for his own business and one that is a significant part of Vancouver and British Columbian history. 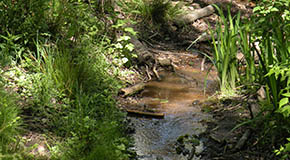 Once a salmon bearing creek, it is only now recovering from a century of colonial settler interference. 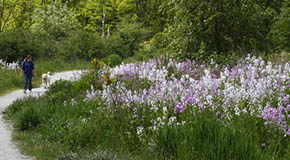 In the meadow you will find a beautiful flower box, and a bee condo. This structure has been installed by the Environmental Youth Alliance to assist the Blue Orchard Mason Bee; a native species that has a vital role in keeping plant communities diverse and productive. This mason bee home is one of 150 established in Vancouver through the volunteer run project.

Manfred’s Meadow is a great place for a picnic, or to rest on the wooden bench. Stop and enjoy the wind in the trees and the sound of birds and other wildlife around you. 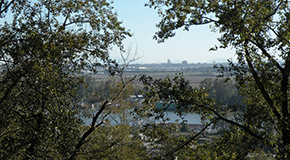 Perched above the north arm of the Fraser River, you will discover a delightful view of the patterned Richmond farmlands.

On a clear day visibility will extend to the Gulf Islands and Mount Baker. Mount Baker is also known as Kweq’ Smánit – white mountain by the Nooksack First Nation peoples of Washington. The Gulf Islands are home to the Hul'qumi'num people.

Take a moment to stop and listen to the trees, river, birds, and wind in this land.

Think about how people would have used this area hundreds or thousands of years ago, before European settlers arrived. It is easy to imagine in a park that is undergoing development such as this one.

Think about the trails that weave through the thick forest that were used by people heading down to the river to fish or commute.

Imagine the bounty of vegetation, fish, and animals.

Take a moment to imagine the animals, people, and fresh water that were here before. 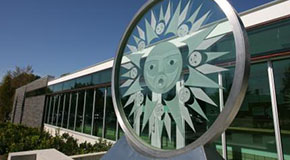 Located at the Killarney Community Centre, the piece is a sandblasted glass whorl on a stainless steel base.

Bright Futures reflects an image of the Coast Salish people and acknowledges their ancestral ties to this part of British Columbia.

In the centre of the glass whorl is a large face, representing the Coast Salish people.  The large triangular wedges represent contemporary athletes while the smaller faces are symbolic of future athletes.  Within the stainless steel frame is LED lighting, which lights the design.

Brent says his sculpture is intended to welcome visitors and athletes, now and in the future, with warmth and open arms.  He says his knowledge of Coast Salish art and culture began with his mother, the artist Susan Point.

This mutual interest has created a source of inspiration and a continuous learning experience he shares with his mother every day.  As a young Salish artist, Brent is committed to contributing to his culture. 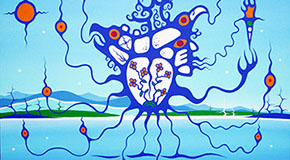 Located inside the Killarney Community Centre, this piece is two acrylic paintings on canvas.

The image illustrates Stephen’s vision of the spirit of the Olympic and Paralympic Games. A birchbark canoe is travelling from east to west, where the games will take place.

Within the canoe is the figure of a chief wearing a headdress, who wishes to share his gifts and culture.  The little birds in the canoe represent the stories of Stephen’s people.  The squiggly lines emanating from the chief’s eyes to the Olympic Flame are mercy lines, indicating the chief’s merciful nature.  The circles are symbols of the healing of land and spirit.

Behind the canoe is a teepee, representing the homeland of the Cree First Nations.  The television set serves as a modern symbol of the effort to communicate.

In his work, Stephen seeks to present the stories of his people, using traditional symbols and images. 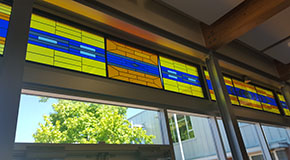 The Eyes of the People - Dionne Paul

Located inside the Killarney Centre this piece is contemporary and vintage/recycled stained glass in wooden frame.

The Eyes of the People features a contemporary Coast Salish eye motif suspended in a pattern representing woven cedar bark.

The eye is a central image in Northwest Coast Aboriginal art - timeless and universally recognized.  Here the eye pattern flows like water, symbolizing the eyes of all people, past, present and future.  At an Olympic and Paralympic Winter Games, a spectator’s eyes observe the athletes competing, the results of the judges who render their decisions and the remarkable overall spectacle.

The colours of the woven pattern signify mountain goat wool, and red and yellow cedar trees, natural resources treasured by the First Nations people of the Northwest Coast.

To connect the work to its location, the blue glass has been recycled from the site’s previous ice rink.

Animals and plants
PREV   NEXT 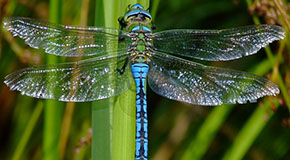 “To Northwest Coast Aboriginal peoples, Dragonfly is a symbol of change, transformation and swiftness. First Nations people of the Northwest coast observe the Dragonfly to be a creature of the wind and also of the water. He represents a symbol of change in the view of self understanding and the kind of change that has its source in mental and emotional maturity and the insight of the deeper meaning of life. The Dragonfly’s swift flight and its ability to move in all six directions radiate a sense of power and poise something that comes only with age and experience.” 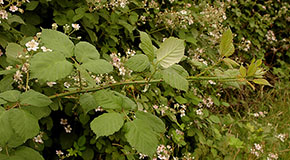 You will see many examples of invasive species in this newly developed park.  Some of which are the himalayan blackberry and english ivy.

“Invasive species are those which occur outside their natural range and can have significant ecological, social and/or economic impacts once established. These species have been introduced to BC without their natural predators and pathogens that would otherwise keep their populations in check in their countries of origin, giving them a competitive advantage over native species.” 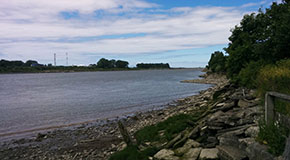 From many points in this walk you can see or hear the fraser river nearby.

The Fraser is the longest river in BC. The river's name in the Halqemeylem (Upriver Halkomelem) language is Sto:lo, and has been adopted by the Halkomelem-speaking peoples of the Lower Mainland as their collective name, Sto:lo.

The Musqueam have had a strong relationship with the Fraser River since time immemorial, and it continues on today.