As you enter Stanley Park from Georgia Street, Lost Lagoon is the body of water to the west of the causeway. A walk around Lost Lagoon is only 1.8 km or 2,362 steps and will take about 30 minutes. There is much to discover on this relatively short walk.

A note on Stanley Park

Before industrialization, the incoming high tide water from Coal Harbour would flow onto the tidal flat and fill-up the Lagoon almost reaching to English Bay. Then, at low tide, the ocean water would slip away. The construction of the Stanley Park causeway in the 1920s has left Lost Lagoon as a freshwater pond. The northeast side of the Lagoon acts as a bio-filtration marsh filtering causeway run-off through a series of holding ponds.

This walk is wheelchair accessible. Pathways are a mix of pavement, paving stones and hard packed gravel. 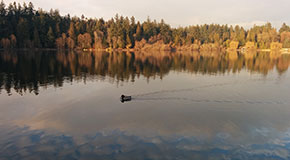 The name for Lost Lagoon comes from a poem written by Pauline Johnson, published in Legends of Vancouver (1911) External website, opens in new tab

"I have always resented that jarring unattractive name [Coal Harbour] for years." She told a biographer, "When I first plied paddle across the gunwale of a light canoe and idled about the margin, I named the sheltered little cove Lost Lagoon. This was just to please my own fancy for, as that perfect summer month drifted on, the ever restless tides left the harbor devoid of any water at my favorite canoeing hour and my pet idling place was lost for many days; hence my fancy to call it Lost Lagoon."

Pauline Johnson (1861-1913) was a writer and performer of Indigenous heritage who wrote of life in Canada in the 19th century. 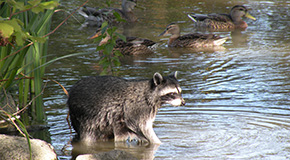 The area around Lost Lagoon is a bird sanctuary; home to herons, swans, and several species of ducks. Mixed in with the birds, you may see a multitude of different species of wildlife from raccoons and coyotes to the occasional deer.

Those interested in flora and fauna as well as natural social history will want to stop by the Stanley Park Nature House. It is located on the south-east shore of Lost Lagoon, under the viewing plaza at the north end of Alberni Street. 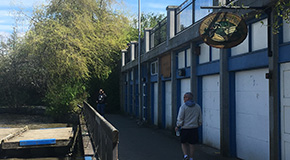 On the southeast bank of Lost Lagoon, the Stanley Park Ecology Society operates from a former boathouse and offers special sessions on plant identification and natural history tours. They "promote awareness of and respect for the natural world and play a leadership role in the stewardship of Stanley Park through collaborative initiatives in education, research and conservation." 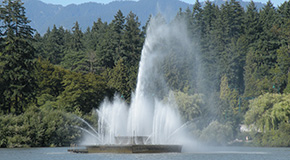 In 1936, the City of Vancouver acknowledged its Golden Jubilee (50th birthday since colonization). A fountain was created to mark the civic celebration and was placed in the middle of Lost Lagoon. The fountain was revitalized in 1986 for the City's Centennial and is clearly seen from any vantage point around the lagoon.