Hastings Park is the City of Vancouver’s second largest park at 66 hectares. This area (as well as all of Vancouver) is on the unceded territories of the Musqueam, Squamish and Tsleil-Waututh.

Since being redeveloped from its traditional uses into park land by the City of Vancouver, it has served as a venue for public events such as horse racing, concerts, professional sports, the Hobiyee Nisga’a New Year Celebration, the annual summer Fair and the Truth and Reconciliation National event.

A walk in the southwest corner of Hastings Park near Renfrew Street is a fantastic way to experience the rich diversity of this expansive and evolving public space. Hastings Park has a variety of different attractions including theme and commemorative gardens, notable buildings, and a stream covered over by settler development for more than 50 years.

This area was an important site for the Musqueam, Squamish and Tsleil-Waututh peoples. An area such as this would have seen a large number of people due to its proximity to both the north and south shores. You can see a variety of diving and dabbling ducks, Canada geese and a hundred other bird species here all year.

This walk is wheelchair accessible. Paths include a mixture of pavement and wooden boardwalks. 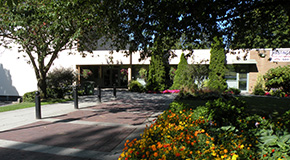 Hastings Community Centre was opened in 1956 after extensive fundraising efforts. It serves the Hastings-Sunrise Community by offering a wide variety of recreational programs and events. The Centre is located in Hastings Community Park: one of Vancouver’s oldest parks. This park boasts a wealth of amenities for both children and adults. A highlight is the new children’s spray park. In the summer, shrieks from the adjacent Pacific National Exhibition help create a festive atmosphere. 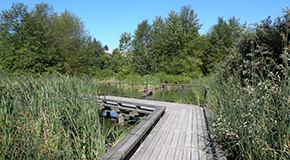 In 1998-1999, 15.5 hectares of Hastings Park were cleared of structures and blacktop so that the Sanctuary could be created. Upon entering you are overcome with a feeling of peace in this lush refuge, as it overflows with greenery and bird calls. The main feature of the Sanctuary is the day lighting of a stream that, for more than 50 years, had been contained in an underground culvert. Engineering Services has enthusiastically collaborated on the project of guiding the storm waters from the surrounding neighbourhood into the Sanctuary marsh, where the water is cleansed through a sophisticated biofiltration system. Eventually, the water collected in the pond could run into Hastings Creek; which is planned to deliver the water into a salt marsh north of Hastings at New Brighton Park. 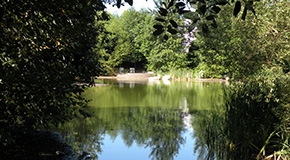 After only a few years, the lake, water plants, islands and still-fragile landscaping are attracting birds into the Park. Local renowned naturalist Al Grass, along with a number of avid bird watchers, has confirmed sightings of 106 species. They include everything from songbirds like the common yellowthroat, to a variety of sea birds such as Caspian terns. The Sanctuary represents the beginning of the greening efforts in the Park, and it is already a fantastic success! 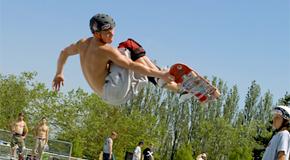 Catch a glimpse of some gravity defying aerials at the world renowned Hastings Bowl Skate Park. The concrete skate park has three winding connected bowls (ranging from 5 to 11 feet deep), plus a separate street course with plenty of coped ledges and wall rides. 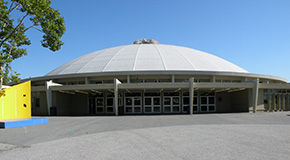 The Agrodome is one of four buildings in the south west corner of the Park. It was built in 1963 and holds 5,000 people or 3,260 when configured to use the hockey or lacrosse surface. 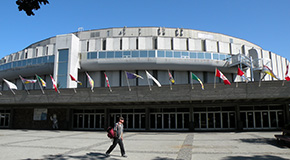 For many years the Pacific Coliseum was the city’s largest indoor venue for sports and entertainment, accommodating close to 18,000 people. W. K. Noppe designed the building in 1966 to 1967 and its simple geometric shape and distinctive ring of white panels classify it as formalist architecture. In 2010, the Pacific Coliseum was the competition site for figure skating and short track speed skating events for the 2010 Winter Olympics.

It was also host to the Truth and Reconciliation National Event which included survivors speaking about the effects of residential schools on their lives, private statement gathering, educational sessions for the public, film screenings, musical performances, healing ceremonies, and many other important events.

The PNE Forum is home for Hoobiyee (pronounced in English as Ho-be-yeh), the Nisga’a New Year Celebration in February each year. All are welcome. 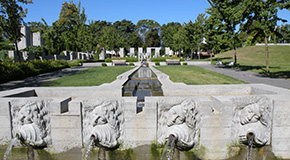 Il Giardino Italiano, completed in 2000, is one of the most elaborately detailed gardens in the City's entire park system. Following the Second World War Italian immigrants predominantly settled in the surrounding Hastings Sunrise and Grandview Woodlands neighbourhoods which are on the unceded territory of the Musqueam, Squamish and Tsleil-Waututh. This project was championed by many of the families and businesses residing in the area. Il Giardino’s distinctive Italian-style plantings include pear, lavender, mulberry and grape.

The Opera Walkway has intricate stone carvings that decorate the walls and flank the unique water features. The carvings tell the story of Italy’s love for opera. Bocce courts, numerous seating areas and a large feast table make Il Giardino Italiano a wonderful gathering area in the Park. 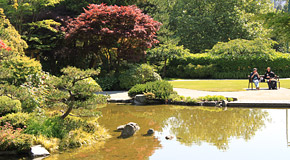 The Momiji Garden offers a more subtly-disciplined choice of plantings, shading, placement and elevations. It was completed in 1993 and, along with the plaques that are now placed in the park, it acknowledges the Hastings Park internment camp which took over 8000 Japanese Canadians and held them against their will in these buildings. 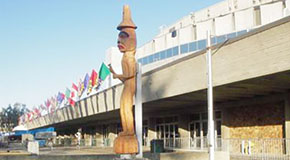 This pole honours Zac George's grandfather, Chief Dan George. He was chief of Tsleil-Waututh First Nation as well as an author and Academy Award-nominated actor.

Ojibwe artist Donald Chrétien created this piece for the 2010 Olympic and Paralympic Winter Games. The clear cast vinyl panels reflect the relationship between the physical and spiritual worlds.

Above the depiction of Turtle Island is the Thunderbird. It reminds people to give thanks for all the things we take and use, and to replenish and respect our resources. At the bottom of the image is a turtle that represents Turtle Island — an Indigenous name for North America. The many animals in the image indicate harmony among creatures, and their innards are exposed, showing their strength. 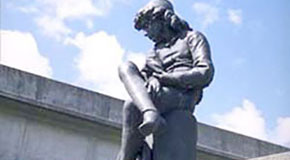 This is a commemorative statue that represents Christopher Columbus as a boy. It originally sat in a small square at Clark Street and 5th Avenue but now resides in Hastings Park. The statue was erected in memory of the Honourable Angelo E. Branca, QC on October 11, 1986.

Christopher Columbus lived from 1451 to 1506. He was an Italian explorer, navigator, and colonizer. You might want to take a moment to consider the effect colonization has had on this area. 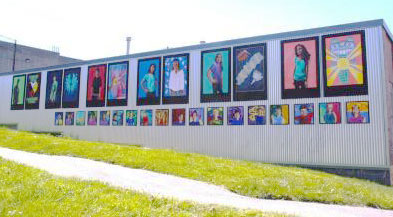 Over the past 8 months Young Artist Warriors has facilitated a number of different artist workshops to youth ages 6 to 24 to complete the mural at 2026 Wall Street. All aspects of the program were free and included nutritious meals for the youth and volunteers. Britannia Community Centre graciously partnered with Young Artist Warriors on this project. They and provided great storage and workspaces for these workshops to take place.

14 sessions were held in which youth were mentored to create their own large-scale works featured in the mural. Jeska Slater painted portraits of each of the youth artists that were working to complete a large-scale piece. The portraits and the youth's original work are displayed side by side. This meant to be a celebration—of the youth themselves, their artistic accomplishments, and their commitment to their community. 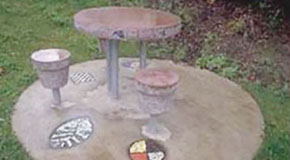 Unique benches, tables, and pebble mosaics are scattered along the path in this small corner park. The artists generated ideas through workshops and an on-site design event. One of the pieces features a Medicine Wheel.

“Medicine wheels represent the alignment and continuous interaction of the physical, emotional, mental and spiritual realities. The circle shape represents the interconnectivity of all aspects of one’s being, including the connection with the natural world. Medicine wheels are frequently believed to be the circle of awareness of the individual self; the circle of knowledge that provides the power we each have over our own lives.”