Despite the challenges of a very wet fall, the New Brighton salt marsh has seen significant developments since September. Most of the wetland is now excavated, with final grading and soil placement underway. 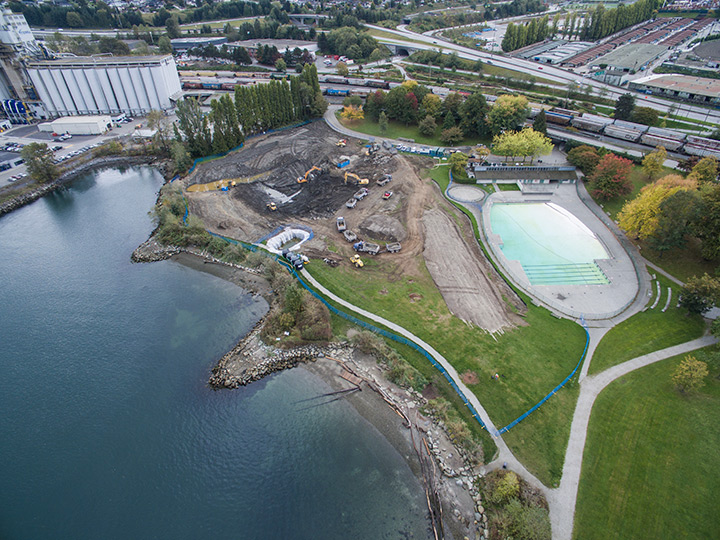 We reached a major milestone by opening the outlets to Burrard Inlet at suitable night-time low tides between November 21 and 26, 2016. It's the first time since the mid-1960s that the area has been opened up to tidal influence. 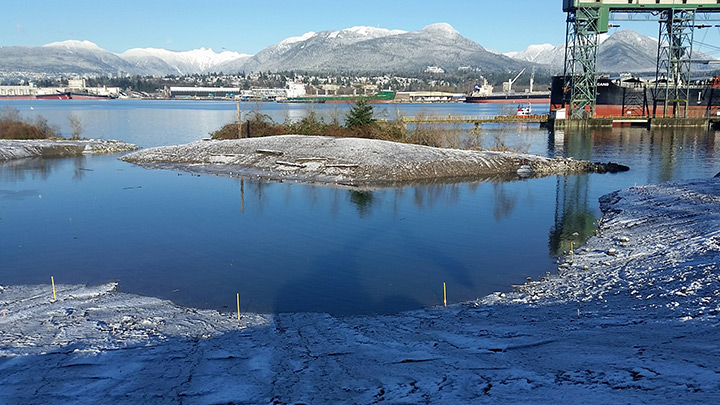 Construction began on September 12. The construction schedule and its key components are:

We updated the off-leash dog areas in the park as follows.

We are monitoring the off-leash areas to see if further changes are required to improve use by visitors with dogs, or to avoid conflicts with other park uses or values. Please be patient as this project develops. Learn about the People, Parks, and Dogs Strategy

Read the discussion guide and consultation summary report from the May 2016 engagement period.

The concept plan was approved by the Park Board on April 18, 2016, based on the design and public engagement process.

The project will change how the eastern portion of New Brighton Park is used, particularly related to the location of the dog off-leash area. For that reason, we asked what you thought about the two dog off-leash area options PDF file (400 KB) in an online questionnaire from February 1 to 15.

The Park Board and Vancouver Fraser Port Authority held open houses on November 3 and 7 to present design concepts for the salt marsh and to receive your input.

We also conducted an online questionnaire from November 2 to 16 to ask what you think about the design concepts. Your responses will help guide development of the preferred design.

The Park Board and Vancouver Fraser Port Authority held an open house on August 29 to share information about the project and receive your feedback on the design concept.

We also conducted an online questionnaire from August 26 to September 9 to ask how you use New Brighton Park and what you think about the proposed project. Your responses will help us develop the concept plan. Thank you to everyone who shared their thoughts.

The Park Board and Vancouver Fraser Port Authority formed a stakeholder advisory group that held its first meeting on July 21.

On May 11, the Park Board approved the project's conceptual design and public engagement process.

The Park Board and Port Metro Vancouver conducted a citywide review of potential sites for shoreline habitat enhancement projects.