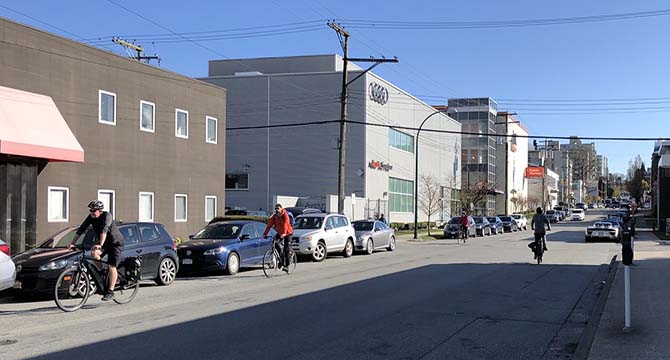 We will be hosting four virtual information sessions to share the design and answer questions. To attend a session, sign-up for a time below.

We’re working to improve cycling connections between the Arbutus Greenway and the Seaside Greenway (seawall).

Arbutus Greenway is an 8.8 kilometre active travel route stretching from near Fir St and W 6th Ave in the north, to the Fraser River in the south. The greenway provides a safe and comfortable cycling route for people of all ages and abilities (AAA).

Seaside Greenway (seawall) is a 28 kilometre route along Vancouver’s coastline. Most of the route has dedicated bike lanes that are separate from cars, making it safe for people of all ages and abilities (AAA).

A series of on-street changes are proposed for:

Our goal is to make a connection that is safe and comfortable for people of all ages and abilities while accommodating access and loading for nearby businesses and residents.

Why we're doing this

Approved by City Council in 2018, the Pine St and W 1st Ave link is a proposed cycling connection between the Arbutus Greenway and the Seaside Greenway seawall. The goal is to:

How this project may affect you

The Arbutus Greenway has transformed 9 km of old railway corridor into a walking, biking, and rolling path from False Creek to the Fraser River.

Find information about Vancouver’s seawall – where it is, what to see and do along the Seawall, and a map of the Seawall.