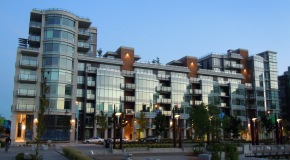 The Olympic Village, developed by the Millennium Development Group, is one of the greenest communities in the world, making Vancouver a leader in sustainable development.

Located in Southeast False Creek, the Olympic Village was built for the 2010 Winter Olympic Games, to house athletes and Olympic officials coming from across the world.

After the Olympics, the Olympic accommodation became residential housing. The development aligns with the City's goals, addressing environmental, economic, and social issues.

The Olympic Village is a mixed-use community, with approximately 1,100 residential units, area parks, and a growing number of retail and service outlets.

April 28, 2014 – The City of Vancouver has officially paid down the entire $630 million debt of the Olympic Village development and recovered an additional $70 million.

Summer 2010 – The City opened a 45,000 square foot community centre in the Olympic Village. The Creekside Community Centre is a LEED platinum standard building. The building harvests rainwater for irrigation and toilet flushing, uses solar power for radiant cooling, has green roof technology and consumes 50% less energy than a standard building.

Overview of the project

Read the developer's full summary report on the Southeast False Creek project, including the Olympic Village:

Here are some of the key Council reports dealing with the Olympic Village planning project:

View a number of documents from Ernst & Young (the court appointed receiver of the Olympic Village):

The Final Sales Agreement Documents have been made publicly available as of May 13, 2016. See the index of records posted on the linked website for the complete list of documents.

Important note The folder below is using File Transfer Protocol (FTP), and is only accessible with Internet Explorer.

Goals of this project

The Olympic Village project's goals align with the City's goals around sustainability, social, and environmental issues.

As part of the Olympic Village, the City built Canada's first residential multi-unit Net Zero Building - one that generates as much energy as it uses.

Energy meters in each suite encourage further reductions by showing residents how much energy they are using and a heat recovery system transfers waste heat from an adjoining grocery store for space heating.

By 2020, the Olympic Village will have 5,000 residential units with a focus on affordable housing.

The buildings used during the 2010 Olympics have become residential housing, with a focus on housing for families. The Olympic Village is a mixed-use community, with about 1,100 residential units - 252 units are affordable housing, and another 100 units are modest market and market housing.

Modest market housing provides housing to residents who are unable to pay market rent - families, persons with disabilities, seniors, and those at risk of homelessness. 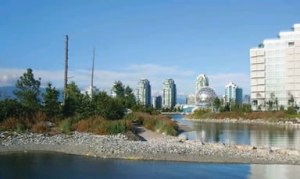 The man-made island off the west shore of the Village - referred to as Habitat Island is an urban sanctuary along Southeast False Creek.

Deep layers of soil have been added to the area to provide nourishment for new trees to grow.

Boulders and logs commonly found along the coastlines in this region of British Columbia provide a home for plants, small animals, insects, crabs, starfish, barnacles, and other creatures. Surrounded by water at high tide, the island is a sanctuary for birds.

More than 200 native trees, shrubs, flowers, and grasses that grow naturally in the region have been planted on the island and along the waterfront path.

Dogs and cyclists are not allowed on the island in order to preserve the natural state.

The ebb and flow of the tide on the rocky shoreline creates a natural home for starfish, crabs, fish, shellfish, and other creatures.

Work leading up to this project

City staff have been planning the Olympic Village development since 2006. Here are some of the key milestones leading up to this project:

History of the area

Built on the last remaining large tract of undeveloped waterfront land near downtown, Southeast False Creek was the site of the Vancouver Olympic Village during the 2010 Winter Olympic and Paralympic games.

The buildings in the Olympic Village were turned over to VANOC on November 1, 2009. During the 2010 Winter Games, the Village housed up to 2,800 athletes and officials. The buildings were returned to the City on April 7, 2010.

After the 2010 games, the City continued to develop the Olympic Village into a community that would house up to 16,000 people.

False Creek was once the winter home of the people from the Squamish Nation. Before 1860, False Creek was five times its present size - extending north to what is now Pender Street, and east to Clark Drive - and was filled with fish and wildlife.

The first Europeans arrived in 1859. It was an English sea captain named Richardson who named the area False Creek.

Southeast False Creek has played a significant role in Vancouver's history. Many key industries that helped build Vancouver were located on or near the site. this includes sawmills, foundaries, ship builders, railyards, metalworks, and salt distributors. 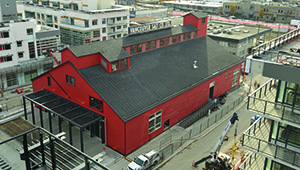 The Salt Building is a very significant landmark in the Southeast False Creek neighborhood. It's a heritage listed building located in the heart of the community on the Northwest corner of First Ave and Manitoba St, which was the original shoreline of False Creek.

The Salt Building, which was built around 1930 to refine raw salt and converted in the 1980s as a paper recycling plant, sat empty for a number of years.

The building is owned by the City of Vancouver and prior to the 2010 Winter Games, it was restored to include a foundation upgrade and basement. During the 2010 Olympic and Paralympic Games, the building was used as the "athletes' living room".

Nova Pole made light poles and transmission towers for much of western Canada. Located on the south side of False Creek, between First Ave and Habitat Island, Nova Pole was the last industrial tenant on Southeast False Creek.