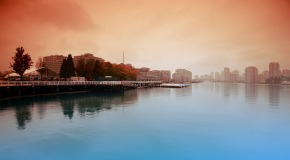 The purpose of this project is to turn Southeast False Creek into a leading model of sustainable development. It features efficient energy solutions, high performance green buildings, and easy transit access.

Southeast False Creek is designed as a mixed-use community with a total population of 11,000 – 13,000 people, with a focus on residential housing.

As a complete neighbourhood – with the 2010 Olympic Village at its core – Southeast False Creek will have goods and services within walking distance, and housing and jobs that are accessible by transit.

As the community grows, retailers, restaurants, and service suppliers are opening in the Village. By summer 2012, the community will enjoy the services of a major drug store, grocery retailer, liquor store, dry cleaner, park, bakery, and restaurants.

In December 2011 a new ferry dock was built in False Creek, adjacent to the Creekside Community Recreation Centre.

Southeast False Creek committed to meeting the LEED (Leadership in Energy and Environmental Design) silver standard, with the goal of meeting the gold standard. The development surpassed this goal by becoming the second neighbourhood in the world to meet the platinum standard in 2011.

Map of the area 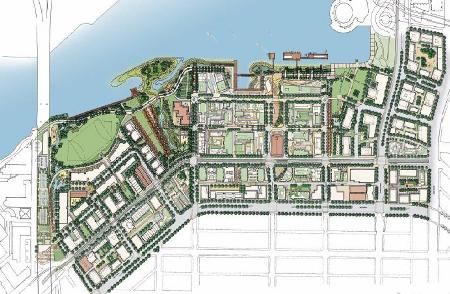 April  2010 -  The public was invited to attend an open house to learn more about and comment on the proposed maximum heights.

May 2008 - There were two opportunities to view and comment on the draft conceptual design for the Plaza in Area 2A of Southeast False Creek (SEFC).

There was also an open house for the public to view and comment on proposed changes to the Official Development Plan for Southeast False Creek (SEFC) Sub-Area 3C. The draft amendments would increase the area’s maximum allowed heights, amend the optimum heights, and change the total allowed floor area.

April 17, 2007 - City Council received a staff report confirming that the City will pursue sewer heat recovery as the heat source for Phase 1 of the Olympic Village and Southeast False Creek (SEFC) development.

March 2007 - There were Neighbourhood Energy Utility open houses for SEFC which included information on heat source options (biomass and sewer heat recovery) for the site.

March 2006 - ​This was an opportunity for the public to view and comment on draft designs of the Public Realm Plan for the entire SEFC site.

February 2006 - This was an opportunity for the public to see the final designs for the public lands infrastructure including stormwater management, energy system, street design, animated waterfront and seaside greenway, and utilities.

October 2005 - A public information session was held to show the progress with parks planning, the Olympic Athletes’ Village, and the public lands infrastructure design including the energy system, stormwater management, streetscape, and waterfront design.

February 2004 - The Planning Department held two public open houses to present changes made to the preliminary SEFC ODP proposal and receive comments on the revised proposal.

July 2003 - City staff presented the input received from the public at the major public events since May 2003.

The public realm guide is a design manual for completing Southeast False Creek's public realm. The guide provides a framework for engaging historic public realm features to be delivered as sustainably as possible.

The public realm plan was approved by Council on 20 July 2006. This document provides a conceptual design framework that will guide the detailed design of the public realm. The public realm includes open spaces, plazas, streets, lanes, and pathways which connects the entire site and link with adjacent neighbourhoods. It is designed to enhance the pedestrian and social experiences of residents and visitors through the incorporation of heritage, sustainability, and urban design.

On 22 July 2008 Council updated the Southeast False Creek green building strategy which applies to new projects in the area.

Goals of this project

By 2020, Southeast False Creek will be home to 12,000-16,000 people and will have six million square feet of development. This will include:

While working to meet these goals, the City is following a set of guiding principles:

Southeast False Creek should promote the implementation of sustainable principles in an urban setting.

The Southeast False Creek plan should improve the health of the False Creek Basin and encourage resource conservation and waste reduction.

Development should ensure viability without subsidy and encourage a vibrant and vital community.

A green building strategy has been adopted for Southeast False Creek, requiring all buildings on City lands to be built to a minimum LEED (Leadership in Energy and Environmental Design) silver standard, with the objective of the gold standard.

Some of Southeast False Creek's green features are:

Work leading up to this project

In 1991, City Council issued a challenge to create a community that is sustainable: “on the south shore of false creek, develop a neighbourhood that is the model of sustainability, incorporating: forward-thinking infrastructure; strategic energy reduction; high-performance buildings; and high transit access”.

The public was invited to attend an open house to discuss the proposed maximum heights for buildings in Southeast False Creek (SEFC).

The City adopted a green building strategy for SEFC, requiring all buildings to meet the LEED (Leadership in Energy and Environmental Design) silver standard.

The SEFC official development plan bylaw was approved by Council on 1 March 2005.

2003 - Launch of the official development plan

History of the area

SEFC has been an industrial area since the late 1800s. Its industrial uses have included sawmills, foundries, shipbuilding, metalworking, salt distribution, warehousing, and the city’s public works yard.

The original shoreline was near 1st Avenue and the land area north of it is comprised of fill from many sources, including Grandview Railway Cut and ash from a former incinerator in the Cambie Yard.

Most of SEFC was first subdivided into streets by Israel Powell in 1888. Powell was one of the chief proponents of British Columbia's 1871 entry into Canada, and he named the streets after the country's provinces, to symbolically represent Canada.

In 1886, the City of Vancouver was established, serving as the western terminus for the Canadia Pacific Railroad across Canada. In the 1890s the city’s residential development first spilled south over False Creek, creating the city’s first suburb, Mount Pleasant, but its shoreline was still not yet built upon.

The Vancouver City Yard relocated to the shore just east of the Cambie Bridge and an incinerator was built there in 1910. Most jobs in these pre-automobile days were in the industrial plants inside the Fairview Beltline streetcar route that circled False Creek.

During the First World War, the city block at the foot of Columbia Street (the Canron site) was home to Coughlan’s shipyard, where a large contract to build 8,800 ton naval ships made the company Vancouver’s largest employer in 1918. Here 2,000 Vancouverites fought the war on the home front, toiling amidst great noise and smoke to produce the largest tonnage of steel ships in the British Empire.

Following the war, a number of new wood yards and coal yards appeared along the Southeast False Creek shore, while the sawmills and metal working industries thrived.

Despite the Depression, Southeast False Creek was the site of significant new activity in the 1930s. In 1931 the Vancouver Salt Company constructed a new building at the foot of Manitoba Street. Today this building is the only building expected to be retained on all the city-owned land north of First Avenue.

In the Second World War 2,000 steelworkers laboured inside the Canron Building, then known as Western Bridge, fabricating large sections of 10,000 freighters to replace the ships sunk by German U-boats in the North Atlantic. Just outside the building 3,000 shipbuilders working for Westcoast Shipbuilders assembled and launched a total of 55 of these 10,000 ton freighters in just 4 years.

On the site immediately to the east, the Sitka Spruce Lumber Company took prime Queen Charlotte Island spruce and milled it into structural members for WWII aircraft.

In the war years the Industrial Age peaked in Vancouver’s False Creek as 5,000 union workers laboured at the Canron site alone, while thousands of others at over a dozen sawmills cranked out materials for the war effort, and smaller machine shops, foundries and manufacturers of industrial equipment filled the spaces between

In the 1960s industry began to leave False Creek and not be replaced. In 1970 city council decided to rezone much of False Creek for housing and parks. In the 1980s Expo 86 became the reason to clear all industry from the north shore of False Creek.

Meanwhile, in Southeast False Creek, workers in the Canron Building were fabricating steel for sites all over the world, as well as for downtown Vancouver highrises, the Alex Fraser Bridge, West Edmonton Mall, Canada Place, Seattle’s Husky Stadium, and for the largest free-standing building in the world, the Boeing plant in Everett, Washington.